Why you should choose quartz for your kitchen or bathroom 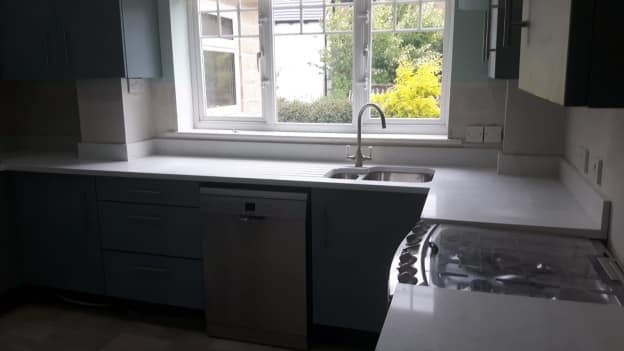 The word ‘quartz’ comes from the German word ‘quarz’ and in Ancient Greece it means ‘icy cold’ as some philosophers believed the mineral to be a form of super-cooled ice. These days the term ‘rock crystal’ is sometimes used as an alternative name for the purest form of quartz, most likely because it’s the second most abundant mineral in the earth’s continental crust behind feldspar.Hard white or colourless, quartz is a mineral made up of silicon and oxygen and is widely found in igneous, metamorphic and sedimentary rocks.There are numerous different kinds of quartz, many of which are semi-precious gemstones and traditionally dating back to ancient times, certain varieties of quartz have been popular minerals when making jewellery and hardstone carving.

How is quartz made?

Quartz counters are made up of approximately 93% quartz (aggregated with other stone-like materials) and 7% of binders that are either plastic-like (polymeric) or cement-based. It’s bound together with other stone-like materials along with resin and then pressed into sheets. Its resins are natural sealants, so quartz surpasses natural stone in this respect as it requires no additional sealing.It’s a hard, durable manmade countertop material which is becoming increasingly popular as a countertop in kitchens and bathrooms and due to the controlled manufacturing process, there are also minimal imperfections.

As mentioned earlier, granite has traditionally been the most popular choice for countertops in the kitchen and bathroom world but as consumers become increasingly more aware of the key features and main benefits of quartz, they are starting to take notice.

Below are some of the overall benefits of choosing quartz for your home:

A lot happens in the kitchen; from chopping and cooking to washing and drying, your kitchen countertops are exposed to nothing short of a culinary battle-zone on a daily basis so it’s worth arming your work surfaces accordingly. A kitchen is also a huge investment which can be very expensive, so when you’re choosing the material, you need to not only think about the look you want but how useful and long-lasting it is likely to be.

Below is a summary of some of the main benefits of choosing quartz for your kitchen:

Bathrooms have changed dramatically over the years and are now more of a feature in a house rather than a room solely for functional use. It’s a place where people can prepare for the day ahead and relax and unwind at night.Floating countertops are also becoming progressively popular as people want their bathrooms to be visually appealing and beautiful places which complement the style of value of the rest of their home. Quartz is a great way to help achieve this blended appearance as consumers can choose it for their kitchen and bathroom worktops.

Below is a summary of some of the main benefits of choosing quartz for your bathroom:

Think we would be a good fit for your next project?